French onion soup is a classic for a reason, but chopping all those onions can turn you into a crying mess. Not to mention, you may not always have the ingredients on hand. We also think it’s a good idea to always have some pantry-friendly soup mixes or ready-made soup available for emergencies and quick meals. That way, you can enjoy French onion soup whenever you feel like it.

We reviewed dozens of French onion soups to identify the best of the best. focusing on various factors from mixes versus ready made soups to overall flavor to reviews from existing buyers. Any of the soups you’ll read about in our top five are available to buy online from Amazon. 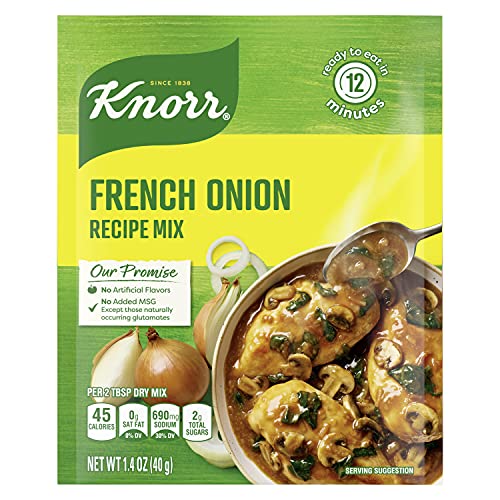 Knorr French Onion Recipe Mix
You can use this versatile French onion mix for soup or other recipes.
$25.56

Knorr French Onion Recipe Mix might not make the most gourmet, authentic French onion soup you’ve ever eaten, but it’s hugely popular any many people love it, which is why it made our top spot.

Knorr French Onion Recipe Mix
You can use this versatile French onion mix for soup or other recipes.
$25.56

While you shouldn’t expect bistro-quality French onion soup from Knorr French Onion Recipe Mix, this is a comforting and extremely easy to make sachet soup that you can’t go too far wrong with. To make French onion soup using this mix, you simply add water and simmer for five minutes. It doesn’t get much simpler than that. However, that isn’t the extent of uses for this French onion recipe mix. You can use this mix to make a range of quick skillet dinners or even French onion dip.

Each package contains 12 sachets of 1.4 ounces, each of which makes 3 cups of soup, which equals 2 to 3 servings, depending on your chosen serving size. This 12-pack retails for around $22, so each package costs less than $2 and each serving less than $1. These sachets should arrive with a long expiry date, which is great for stocking the pantry. 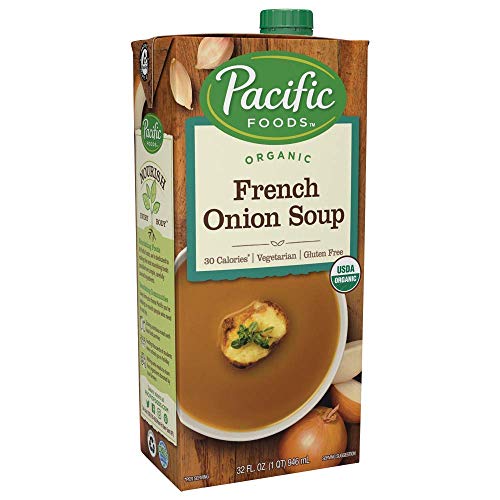 You won’t find many organic onion soups on the market, which is why Pacific Foods Organic French Onion Soup stands out from the crowd. It’s certified by the USDA, so you can be sure of its organic status. It also contains no genetically engineered ingredients, which we know is a concern for many consumers. This soup contains all vegetarian ingredients, but it does contain butter, so it isn’t suitable for vegans or people who follow a dairy-free diet. The ingredients are simple and natural, without any artificial colors, flavors, or preservatives.

If you’re going to buy this pack of French onion soup, you’ll need to be prepared to commit to some volume, as it’s only available in large packs of 12 cartons, each of which contains 32 ounces of soup. These cartons can be stored at ambient temperatures until opened, however, and should have plenty of self life, so you don’t need to eat them all at once. A case of 12 cartons costs $53, which works out quite good value per serving. 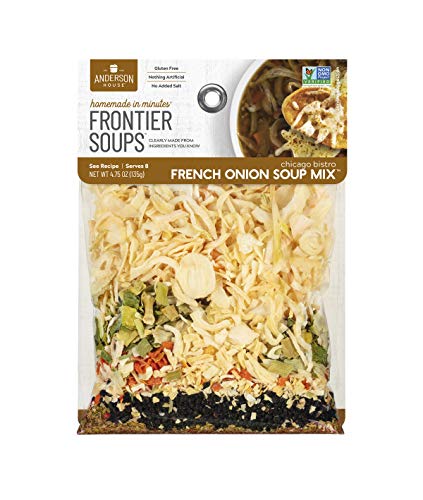 Frontier Soups Chicago Bistro French Onion Soup Mix
Made of dried ingredients, this mix is almost like soup made from scratch.
$16.94

What’s unique about Frontier Soups Chicago Bistro French Onion Soup Mix is that it contains whole dried and dehydrated ingredient, which is a far cry from powdered mixes, which often contain artificial or sub par ingredients. Sure, it takes a little longer to make than most soup mixes, but when you’re done, it tastes basically like a homemade soup made from scratch. You will need a few extra ingredients, such as an onion and broth, but you cook it your way, using a broth of your choice, so you can make it vegan or vegetarian if you choose. With no added salt, either, you can season it as you desire to make it lower in sodium, should you need to.

The sachet of ingredients costs just $6, which isn’t much to pay for quality ingredients. It cooks up in approximately 50 minutes and serves 4 people. 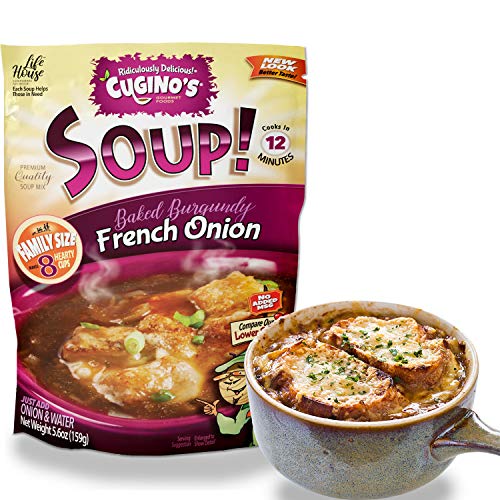 Cugino’s Ridiculously Delicious Soups French Onion Soup offers impressive simplicity for when you want French onion soup and you want it now. All you need to do is add water and a sliced onion and simmer it for 10 minutes. However, for a better flavor, you can slowly caramelize the onion before adding the soup mix and water, and leaving it to simmer. If you’re feeling lazy or just need a quick snack, you can forget about the fresh onion altogether and just add boiling water. What’s more, you can use this mix for other recipes, such as French onion dip.

Each 5.6 ounce pack makes 8 servings and you get 2 packs for around $14, which works out at less than a dollar per serving. You don’t need to use the whole pack at once, but you will need to store any leftover powder mixture in an airtight container to keep it fresh. 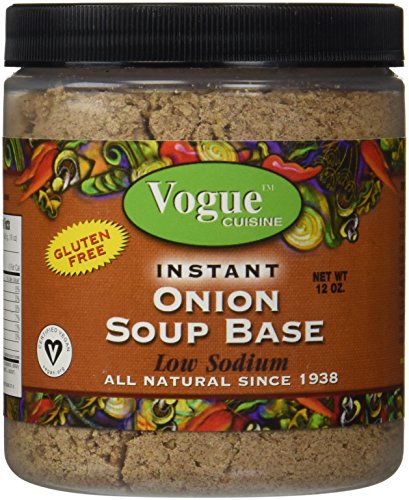 Vogue Cuisine Onion Soup & Seasoning Base
The ideal base for French onion soup and so much more.
$16.69

There are times when you want to cook from scratch but need a little helping hand. Vogue Cuisine Onion Soup & Seasoning Base is a great base for French onion soup if you want to make it vegan or vegetarian, and you won’t need much more than some fresh onions and a bit of patience. Sure, it isn’t as simple as heating up ready made soup or adding water to a French onion soup sachet, but the results will be impressive without much extra effort. That said, you can simply add boiling water to this soup and seasoning base to make a tasty onion broth that’s ready to drink right away.

This onion soup base is suitable for vegans and gluten free, plus it has an organic formula and is very low in sodium. This means it’s suitable for most dietary requirements. Each pack contains 12 ounces and costs around $15, which might seem like a lot, but 12 ounces is equal to 75 servings, so a little goes a long way.

Choosing the best French onion soup isn’t easy since there are so many options out there, from soup mixes and bases to ready made soups. It’s important to think about your needs when it comes to purchasing, such as required shelf life or any dietary requirements you might have. If you’re looking to stock your pantry in case of an emergency, you might also be interested in our guide to freeze dried foods.

The Best Red Beans and Rice

Pinto beans are the most popularRead Article

All of our reviews and recommendations are based on unbiased research by our editorial team. Read more about us.

Have an idea to improve Healing Daily?