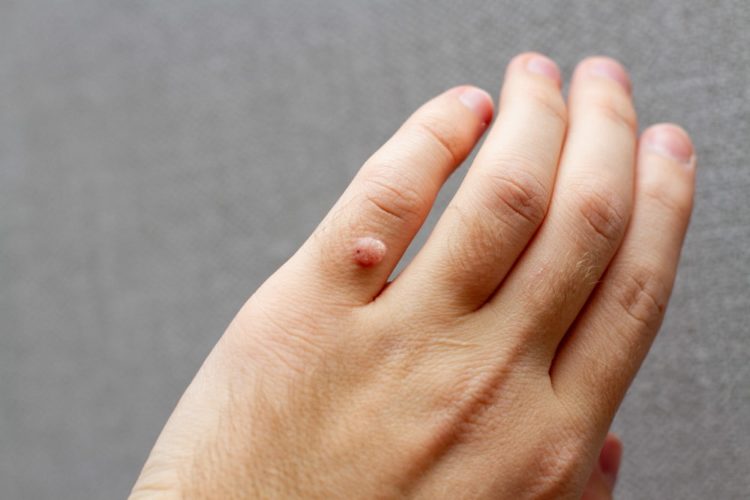 They’re ugly and embarrassing. When you discover you have one or more, you recoil in disgust. A wart? Where did that come from? Who knows, but one thing is sure—you want it gone. You’ve heard about all the various methods for killing it, but some sound painful, and others seem like they take forever.

What are your options when it comes to vanquishing common warts? The following guide with tell you all you need to know about getting rid of warts.

Warts are unsightly skin growths that develop on various parts of the body, most commonly the fingers, hands, and arms. Like little benign (non-cancerous) tumors, they can take two to six months to grow to visible size.

We can thank the human papillomavirus (HPV) for the existence of warts, as it causes the vast majority of them. Don’t let that scare you, though. Yes, can be transmitted sexually, but there are more than 150 types, and most forms are spread by casual skin contact between people, or via shared objects like towels or razors.

Types of warts you can catch from others include:

2. 5 Standard Techniques for Getting Rid of Warts

Warts often go away on their own, but it can take years. To get rid of yours sooner rather than later, start with the standard treatments, which include the following.

The most common of these is Compound W and other brands of salicylic acid. The acid gradually “eats” away at the wart, but it takes a while before the wart is completely gone—often about three months.

If over-the-counter acids don’t work, talk to your doctor about alternatives like trichloroacetic acid, which may work better.

Cryotherapy freezes the wart, killing the tissues so they fall off later. You should go to your doctor or dermatologist for this treatment. He or she will use liquid nitrogen to freeze the wart, which is a quick and efficient process. You may require repeated treatments to fully get rid of it, however.

You can try over-the-counter freezing sprays, but they may not go deep enough to be completely effective. They can also be painful, as you have to apply them for longer periods than what is required in the doctor’s office.

After freezing, a blister forms over the wart. It takes one to two weeks for the dead tissue to fall off.

An insect called the blister beetle excretes this fatty substance, which is a potent blistering agent when applied topically. Your doctor administers it, after which it creates a blister. As that blister heals, the cantharidin kills the wart cells. You should see results in a couple of hours, but the process may be uncomfortable.

If you’ve tried other methods and they haven’t worked, you may want your doctor to simply cut the wart(s) off. He or she may also destroy the base of the wart with cryotherapy to be sure it doesn’t return.

Laser surgery is another option—your doctor uses a laser beam to burn and destroy the wart. Either of these methods may leave a scar, so they’re usually used as a last resort.

Viruses cause warts, which means your immune system can fight them off. If it hasn’t done so on its own, it may need some help. Doctors can inject bleomycin into the wart to kill off the virus. Immunotherapy drugs like imiquimod may also be used. They usually come in the form of prescription creams and help stimulate the immune system to fight off the wart.

You can find many home remedies for warts on the Internet, but most do not have any scientific evidence behind them. These two do:

In a 2002 study, researchers found that duct tape may be more effective even than cryotherapy for the treatment of common warts. Other studies have shown conflicting results, but this one is worth a try.

Here’s what you need to do: Place a small piece of duct tape over the wart and leave for six days. Remove the tape and soak the wart in water, then rub with an emery board or pumice stone. Let the skin “breathe” for one day, then repeat the next week. The wart should be gone within several weeks.

Garlic contains a compound called “allicin” that has virus-fighting effects. In a 2014 study, researchers found that 96 percent of patients who applied a garlic extract to their common warts achieved complete eradication, and their warts didn’t come back.

Crush one clove of garlic and mix it with water, or use garlic juice. Apply the solution to the wart. Cover with a bandage and leave it. Repeat the next day and every day thereafter for three-to-four weeks.

Other home remedies that may work but haven’t been proven effective in studies include the following. Simply apply to the wart daily and cover it with a bandage.

Most everyone in this world couldRead Article

Light therapy is something that weRead Article

All of our reviews and recommendations are based on unbiased research by our editorial team. Read more about us.

Have an idea to improve Healing Daily?